The biggest surprise to us when it comes to the 2021 GMC Yukon is just how good this thing looks. Not that Yukons have ever been unattractive. But this one is downright fantastic. Design is subjective, of course, but we’re willing to argue with anybody who claims otherwise. Today is the world’s first look at the all-new version of the renown nameplate from a 108-year-old brand, and like the 2021 Chevrolet Tahoe and Suburban, there’s a lot to go over. So throw on your best flannel, pour yourself a warm drink of something strong, and let’s get down to brass tacks.

Like the 2021 Chevrolet Tahoe and Suburban that was revealed last month, the major highlights of the 2021 GMC Yukon that buyers will immediately notice are the following:

The storage solutions aren’t limited to behind the third row. A power sliding rear console, available on SLT trim levels and up, can slide back as far as 10 inches, yielding an open space for a bag, while a clever hidden drawer can also be found to store your special ration of Cliff bars. The 2021 GMC Yukon and Yukon XL share a triplicity of engines with the Sierra 1500. The standard engine is an all-new 5.3L L84 V8, while the more powerful 6.2L L87 V8 engine, delivering 420 horsepower and 460 lb-ft of torque, is offered on higher-end trim levels. Both engines feature stop/start technology and new Dynamic Fuel Management that enables the engine to operate on as little as two cylinders, depending on demand, to optimize efficiency. Thirdly, the 3.0L Duramax turbo-diesel offered in the Sierra, delivering 277 hp and 460 lb-ft of torque, makes an appearance. This motor is expected to deliver class-leading fuel economy in the full-size SUV space; a crown it will likely share with the new Chevy Tahoe with the same engine.

All three engines are paired with a 10-speed automatic transmission and GMC’s Electronic Precision Shift push-button gear selector. That’s right, no more column shifter. Power is sent to the rear wheels as standard, while four-wheel-drive is optional.

The eLSD has the ability to preemptively manage axle torque and vehicle behavior in a way that a mechanical LSD simply cannot do. If wheel slip is detected on either side, eLSD reacts quickly to shift power to the wheel with better traction. In 4WD LO, the eLSD operates at locking torque to prevent wheelslip in off-road conditions. 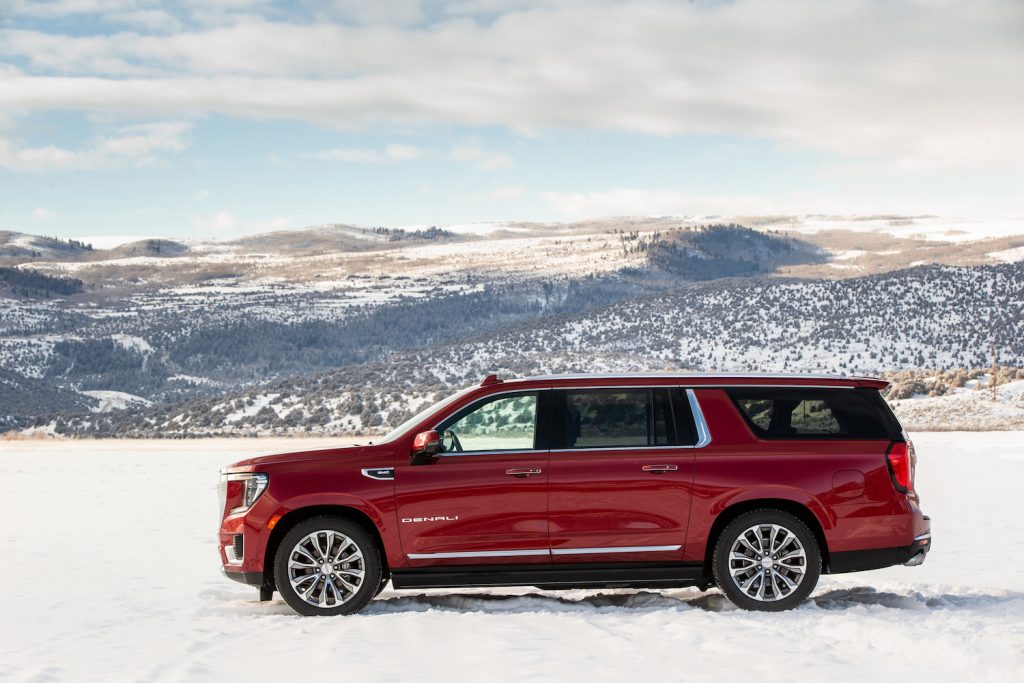 Like before, the 2021 GMC Yukon can be had with available Magnetic Ride Control for improved dynamics. Using sensors to continually read the road, the system is able to alter the damping rate of the shocks almost instantly to reduce bouncing, body roll and vibrations that simply can’t be replicated with traditional shock absorbers.

Furthermore, there’s a newly available four-corner Air Ride Adaptive Suspension on higher trim levels. This system offers ride-height adjustments of up to 4 inches (100 mm) total, as well as an automatic self-leveling feature. Drivers can raise the body up to 2 inches (50 mm) for additional ground clearance when driving off-road, while the system automatically lowers Yukon’s base ride height three-quarters-of-an-inch to improve aerodynamics and fuel efficiency while driving on the highway. At low speeds or when parked, a drivers can command the 2021 GMC Yukon to drop two full inches for improved occupant entry and exit.

All of this hardware, along with the new independent rear suspension, will help the new Yukon SUV deliver levels of ride and handling typically associated with vehicles far smaller and lighter. On both the 2021 GMC Yukon and Yukon XL, access to the third row is easier than ever, thanks to new sliding second-row seats that improve ingress and egress, with the second row now sliding a full 5.5 inches.

Overall, the wheelbase of the 2021 Yukon grows nearly 5-inches with a 6.1 increase in overall length compared to the current model (an identical improvement to the Chevrolet Tahoe), it offers 41 percent more third-row legroom and 66 percent greater cargo volume behind the third row as a result. Maximum cargo room increases by 30 percent. While the increase in dimensions surely helped, it’s the transition to an independent rear suspension that aided the most. No longer does the cabin have to sacrifice room to accommodate a live rear axle beneath the floor.

Meanwhile, the 2021 GMC Yukon XL sees a 4.1 inch (104 mm) increase in wheelbase. The massive SUV will also share the title with the 2021 Chevrolet Suburban of having the most passenger and cargo space of any SUV, with maximum cargo volume expanding 19 percent to 144.7 cubic feet even though the overall length of the 2021 Yukon XL increases less than 1 percent.

With all of its size and heft, it makes sense that GMC aimed to make the 2021 Yukon family more approachable when it comes to safer operation. So there’s an HD surround vision camera, a rear camera mirror, sensors all over the place, and incredible towing technology that monitors blind zones, trailer tire pressure, and even has presets for recognized trailers. Automatic emergency braking is also standard on all models now.

The all-new 2021 Yukon and Yukon XL go on sale this summer with production taking place at the GM Arlington, Texas assembly facility. Peep the gallery below for more visual details on how the sliding center console, seat storage, and trailering technology work.