All photos by and for MuscleCarsAndTrucks.com

Believe it or not, the mid-engine 1984 Dodge Rampage you see before you took just ten weeks to build, but took years for the plan to come together. Arrington Performance CEO and SEMA builder extraordinaire Mike Copland was just waiting for the right donor vehicle. In this case, a bohemian camper originally owned by an elderly woman residing in the Pacific Northwest.

In place of the camper in the bed is now a built out 392 Hemi V8 completely with a Borla 8-stack injection system, pushing out an amazing 650 horsepower without the use of forced induction, which is the best way to do it if you ask us. Sending all of this mid-ship power to the very nearby rear wheels is a Mendeola transaxle. Red Line lubricants and additives were used throughout the build process. 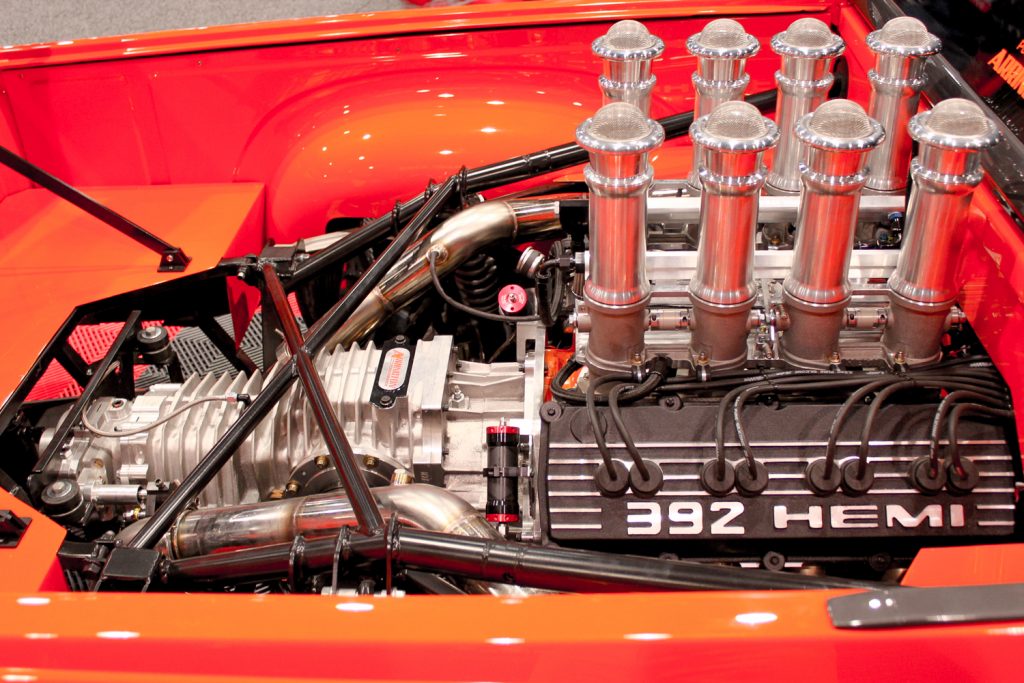 Here are some more details of this devilish Dodge: a Holley Dominator EFI ECU commands the Hemi V8, which also wears modified Kooks headers that were originally made for an LS engine, but has been modified with Hemi flanges. Additionally, this Dodge Rampage, appropriately named ‘Outrage’, features a modified Factory Five chassis that has been lengthened and narrowed to accommodate the original wheelbase. Providing the stopping power is a set of Baer XTR 6-piston calipers and 14-inch rotors in all four corners, which are fitted behind a set of Forgeline custom wheels measuring 18×10 at the front and 18×11 at the rear wrapped in sticky BFGoodrich G-Force Rival S 1.5 tires. Added for good measure is a front splitter and a rear wing, but we’re not sure how functional they are.

Performance numbers such as 0-60 or a quarter-mile time were not immediately available for this pint-sized pickup, but the intent of this build is for it to be driven. We hope to see more of Copeland’s Dodge Outrage soon, and hopefully with the monster Hemi engine banging off the rev limiter.