1. THE 2020 CORVETTE STINGRAY HAS NO MANUAL TRANSMISSION, BUT….

Due to packaging issues involved with moving the engine behind the driver, there just doesn’t appear to be room to fit a shifter linkage running to the cabin of the 2020 Corvette Stingray. While this is certainly a sad fact for fans of the manual gearbox, the by-wire eight speed Tremec DCT is no doubt responsible in part for the cars great acceleration figures.

That being said, General Motors has filed a patent with the USPTO for a “clutch by wire” system. While we aren’t sure how that will translate into the real world, we are willing to bet that it could end up in the mid-engine CORVETTE.

The 2020 Corvette C8 Stingray is expected to be one of the quickest Corvettes ever. Sixty mph is said to be dispatched from a stop in under three seconds, which rivals figures posted by the previous generation C7 Corvette ZR1. That car had 260 more horsepower than this new Stingray, and it barely outpaces the base model C8. Again, this is the base model! 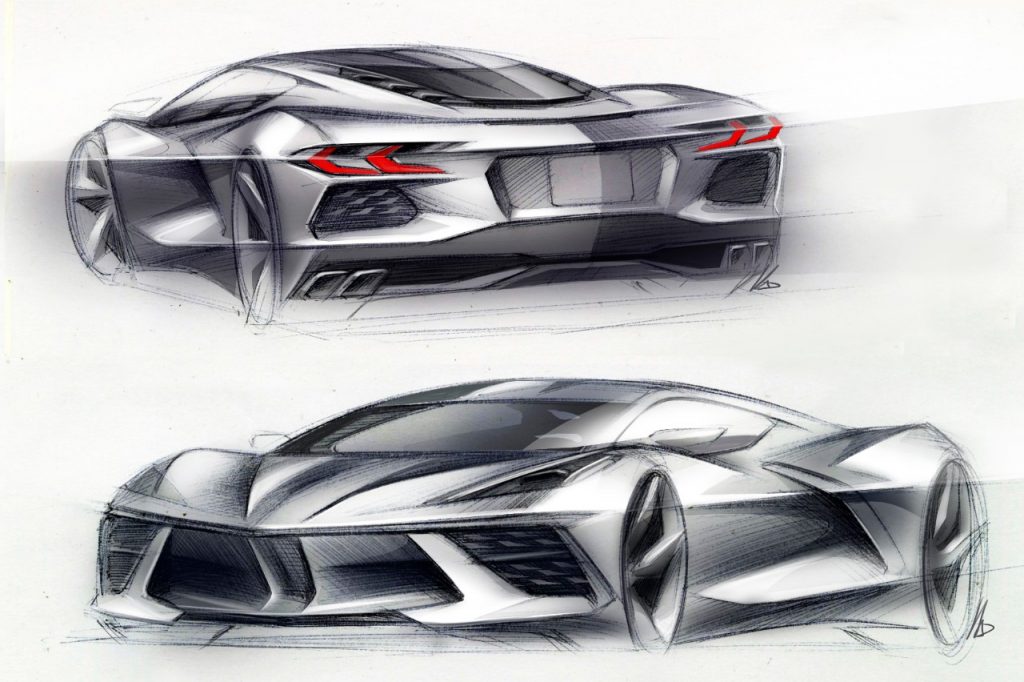 A staple for 66 years, Chevrolet has decided to finally move away from this antiquated suspension set-up with the 2020 Corvette Stingray. This is not to slight what General Motors has been able to do with those leaf springs, but it is exciting to learn the mid-engine Corvette will sport coil springs between the control arms on all four corners. That is not just new for the C8 either, as no Corvette has ever been equipped that way.

It shouldn’t really come as a surprise to anyone that Chevrolet decided to reveal the C8 with a 6.2 liter push-rod small block behind the bulkhead. While the new motor does carry over the same bore and stroke, as well as the same 11:5:1 compression ratio as its predecessor, the LT2 has some notable differences.

Unlike the LT1 in the C7, a new dry-sump lubrication system has been fitted to all C8 models. This was offered on Corvette Stingrays, but only with the optional Z51 performance pack. Due to the new intake and exhaust systems, total output has grown significantly as well, and with the performance exhaust installed you can expect 495 horsepower and 470 lb-ft. You can also expect some seriously potent noise to come from that naturally aspirated V8, something that has been missing from the mid-engine sports car segment for a few years now (for $60,000 anyway).

5. THE C8 CORVETTE IS A PACKAGING POWERHOUSE

In the pursuit of a low center of gravity, and in turn, improved handling, the 2020 Corvette Stingray has done some interesting, albeit impressive packaging. The engine and the transmission are in fact so far down in the chassis that the valve covers of the engine sit below the top of the 20 inch rear wheels. There are also twin saddlebag style fuel tanks on this Corvette, which is a first for General Motors. There is even room for two golf bags in the rear storage space behind the engine, because this still is a Corvette after all.

6. THE CHASSIS IS ALMOST ENTIRELY ALUMINUM

While most mid-engined cars are starting to rely heavily on expensive materials in their construction, the Corvette always had to be an attainable car. General Motors knew the risk going into this project of changing a long lasting and beloved American recipe (see: Coca Cola circa 1985). Driving the base price way up on the mid-engine Corvette would have certainly been problematic for the C8, and as such expensive materials were only used where it was cost effective.

As a result, the mid-engine Corvette utilizes an aluminum construction with plastic fiber body paneling like the generation before it. There are two pieces of carbon fibre on the car, a rear bumper support beam and an underbody close-out panel. The mid-engine Corvette is following suit with many of its competitors and allowing for a deeper level of customization on the cars. For the debut of this eight generation Corvette, we get more than 12 exterior colors, six different seat belt colors, two stitching packages, and the choice of six different interior themes. If that isn’t quite enough custom fittings for you to choose from, there are also three different levels of seat, ranging from a standard comfort all the way up to a competition ready sports seat.