When the 2020 Dodge Charger Hellcat Widebody debuted at the end of last month, we noticed that the vehicle was being touted as the fastest production vehicle in the world with four doors. However, Mopar fans at large may have noticed that the improved Charger Hellcat has a slower top speed than before. Go figure that all of that added friction to improve handling has amounted to a slight compromise: a lower top speed of 196 miles per hour, down from 204 miles per hour.

The non-widebody Dodge Charger Hellcat had a lower rolling resistance than the new model, and the brand claimed a 204 miles per hour top speed when testing it. One would need an awfully long airstrip to see that speed, so losing eight miles per hour at the top is an easy trade off for the ability to feel improved cornering at any velocity.

Here’s the thing, though. Despite the drop, the thickened-up Dodge Charger Hellcat is still the fastest production vehicle with four doors.

Two things happened here. The first is that Dodge is effectively discontinuing non-widebody Charger Hellcat models going forward, and replacing it with this new stanced-out version with steamroller tires for enhanced lateral grip and handling capabilities. 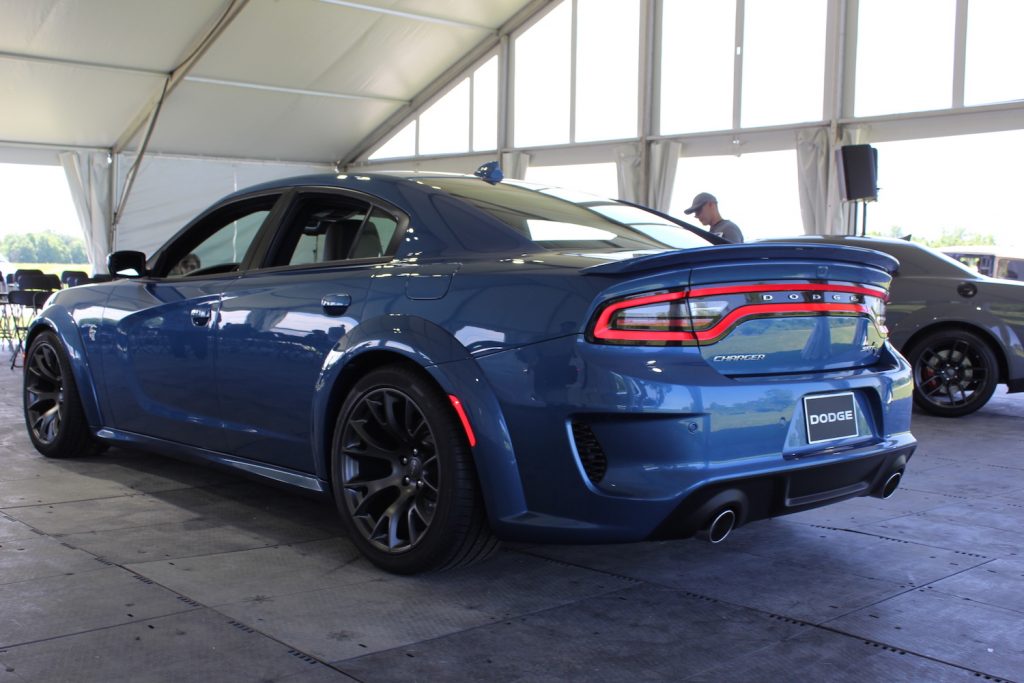 The second reason is that, along with the discontinuation of the non-widebody Charger Hellcat, the Cadillac CTS-V has also reached the end of its product life cycle. The 640 horsepower Cadillac had a top speed of 200 miles per hour, and was only eclipsed by the Charger Hellcat’s V-max. At one point, the third-generation CTS-V was the fastest vehicle offered by General Motors, until the launch of the 755 horsepower C7 Corvette ZR1.

The legendary CTS-V is expected to be replaced by the Cadillac CT5-V Blackwing as early as next year, while production of the C7 Corvette is winding down in August to make room for the next-generation model debuting in 10 days.

The Charger Hellcat Widebody launches this fall, with pricing to be announced at a later date.