The Tesla Cybertruck is a pickup for people that know nothing about trucks. If they did, they wouldn’t have rabidly applauded over a cherry-picked video depicting the controversially designed electric truck pulling a base, RWD Ford F-150 XL with what’s presumed to be either the base 2.7L V6 EcoBoost engine with 325 hp and 400 lb-ft of torque. Turns out the people at Ford Motor Company didn’t appreciate the stunt at their expense, either, with Sundeep Madra, vice president of Ford X taking to Twitter sending a volley at Tesla founder and CEO Elon Musk. To which Musk replied, “bring it on.” 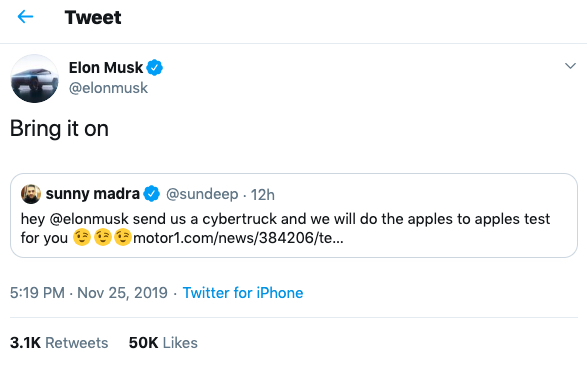 When doing a (completely useless) truck pull test, it’s important to take a few things into account. Almost always, the heavier truck will win. Which the Tesla Cybertruck probably is here, even if California’s Messiah claimed that the rolling polygon would weigh the same as the aluminum-bodied truck. Never mind that the notion of a battery-powered truck utilizing 3mm thick steel as its body weighing the same as a military-grade aluminum-paneled truck even has even the least skeptical among us raising an eyebrow.

Another factor to consider besides weight is traction. Specifically, how well the power can be put to the ground. The moment one truck slips, the content tends to be over, with the more planted of the two taking the win. All wheel drive is a major factor here. In the hype video, the Tesla Cybertruck prototype appears to have all-wheel-drive. The Ford F-150 STX clearly does not.

Additionally, Ford recently told Business Insider that the company bares little concern for the Tesla Cybertruck at this juncture, stating the following:

With America’s best-selling truck for 42 years, we’ve always focused on serving our truck customers regardless of what others say or do. We look forward to our all-new F-150 hybrid coming next year and all-electric F-150 in a few years.

Maybe we’ll see a true apples-to-apples test in the near future. But like most things that happen on social media, it’s probably all talk.

Ford plans on launching an all-electric F-150 in 2022, just after Tesla plans on bringing the Cybertruck to market in late 2021. General Motors plans on doing the same in 2021, as well, with an electric Chevrolet Silverado, electric GMC Sierra, and an electric Hummer pickup truck.

Beyond the so-called oldcorps, other electric pickup trucks in development include the Rivian R1T, and Bollinger B2, as well as farther out trucks from Karma Automotive, and Ohio’s Lordstown Motors.