General Motors may soon announce improvements to their Chevrolet Silverado 1500 and GMC Sierra 1500 Duramax diesel half-ton pickup trucks to further increase their appeal. Speaking with John Barta, assistant chief engineer of diesel engine controls at General Motors, the top priority for these diesel trucks was fuel economy, with lowered tow ratings as a tradeoff. Currently, the highest max tow rating for a half-ton Duramax truck is 9,300 lbs. That may change.

“We’re actually looking at upgrading some of the materials around (the engine bay) to see if we can maybe raise our tow rating,” said Barta to MC&T.

“We do know that (95 percent) of our light duty customers don’t tow over 9,000 pounds… There was a conscious decision to maybe not go after the towing but go after the fuel economy. We realized that our tow rating is hitting 95 percent of the customer we have,” he said.

The GM half-ton diesel trucks achieve class-leading fuel economy in the market today, with the Silverado 1500 Duramax 4X2 achieving an incredible 33 mpg highway and 23 mpg city. The Sierra 1500 Duramax comes in at 30 mpg highway and 23 city. The difference in highway fuel economy reflects a corporate fleet average of how customers option and spec their vehicles – where the GMC tends to have more content, and thus more weight in the test. We will share further details soon.

“We just launched the engine, but we’re not standing still… we’re trying to improve performance and still lower emissions. It’s a delicate balance to do that.”

“Even though it’s nice to brag about big numbers, in reality, light duty customers are not towing that large with their trucks. We think we hit the right balance with delivering class leading fuel economy and still be able to tow what they tow as a light duty customer.”

The 2020 Chevrolet Silverado 1500 Duramax and 2020 GMC Sierra 1500 Duramax pickup trucks deliver on their promises of unprecedented fuel economy for a half-ton truck, with each of them achieving 30 miles per gallon on the highway or better thanks to the fuel sipping nature of a diesel engine. We recently tested a Sierra 1500 Duramax over the span of 1,500 miles and with some lead-footed combined driving, still averaged a highly impressive 27 miles per gallon. We hope to share more details on the adventure with you soon. Much of the achieved fuel economy can be attributed to the straight-six engine configuration itself.

“An inline six is an inherently balanced engine that gives us great NVH without adding balance shafts, so there’s an advantage right there for fuel economy. We don’t have as much rotating mass that we have to support that a V6 does,” he said. There are a few packaging advantages, as well. Like everything, however, there are compromises. Ironically, it would appear that the tradeoff has much to do with the heat that makes the DPF after-treatment system work so effectively. The heat in turn inhibits cooling, which in turn limits the maximum tow rating on the half-ton Duramax trucks.

“All of our challenges with getting a higher tow rating with the 3.0L is mostly around heat rejection under the hood. We have our Diesel Particulate Filter (DPF) under hood that has to go through regenerations to get the soot out, and it gets hot under hood,” said Barta. The DPF is the after-treatment system described above.

“The components around that item have to be protected. If you look under the hood you’ll see a significant amount of silver ‘moon tape’ around to make sure things aren’t getting overheated… if we were to go up in higher towing, which we can, we start impacting the possibility of deteriorating some of the components.”

Improving these materials can improve the tow rating as a result.

In addition to potential half-ton Duramax towing upgrades, General Motors does have a few updates in store for the T1 platform trucks, which launched last year. By 2021 we expect to see notable interior improvements focused around the center stack. By 2022, the Chevrolet Silverado will have a highly-capable off-road variant that is proposed to be called the ‘Silverado ZRX.’ Beyond that, GM plans to introduce its first-ever battery electric full-sized truck, which could wear the Hummer badge.

The 3.0L LM2 Duramax diesel engine is SAE rated at 277 horsepower and 460 lb-ft of torque in both GM half-ton trucks. 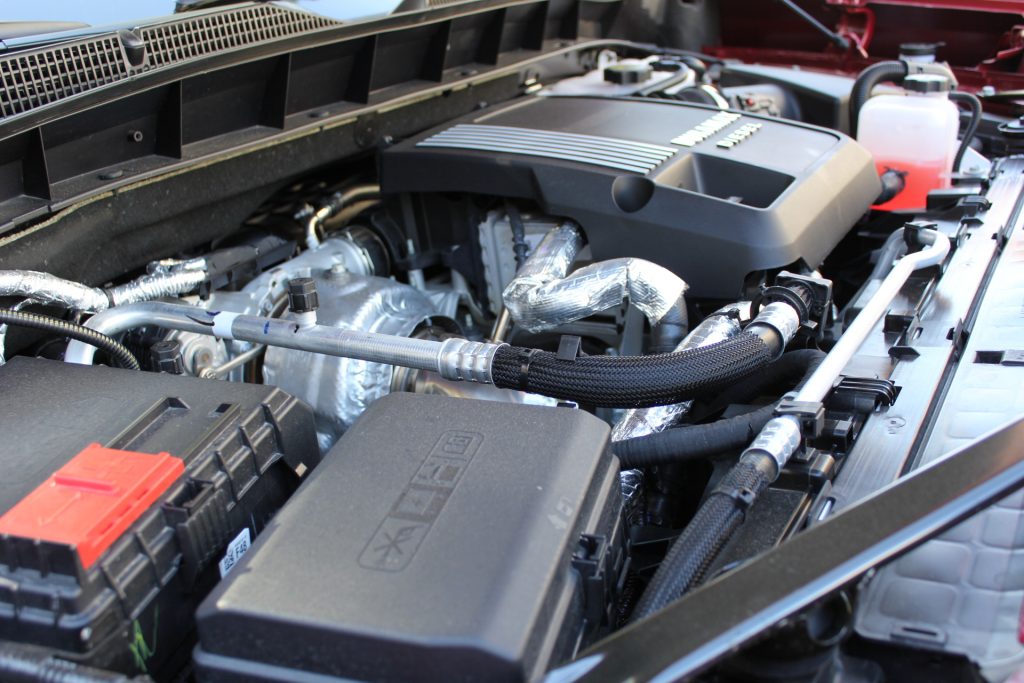