It’s not just that the 2020 Jeep Gladiator Rubicon and Chevrolet Colorado ZR2 Bison represent two of the most capable off-road pickup trucks from the factory. It’s that they achieve this objective in wildly different ways. On one end, you have an American Icon, enjoying a warm homecoming to the midsize pickup truck segment after being absent for nearly thirty years. Armed with an arsenal of proven off-road equipment and a brand that stakes its reputation on the trails, the Jeep Gladiator Rubicon enters the Colosseum with its weapons pointed at a beast. That beast is the Chevrolet Colorado ZR2 Bison. 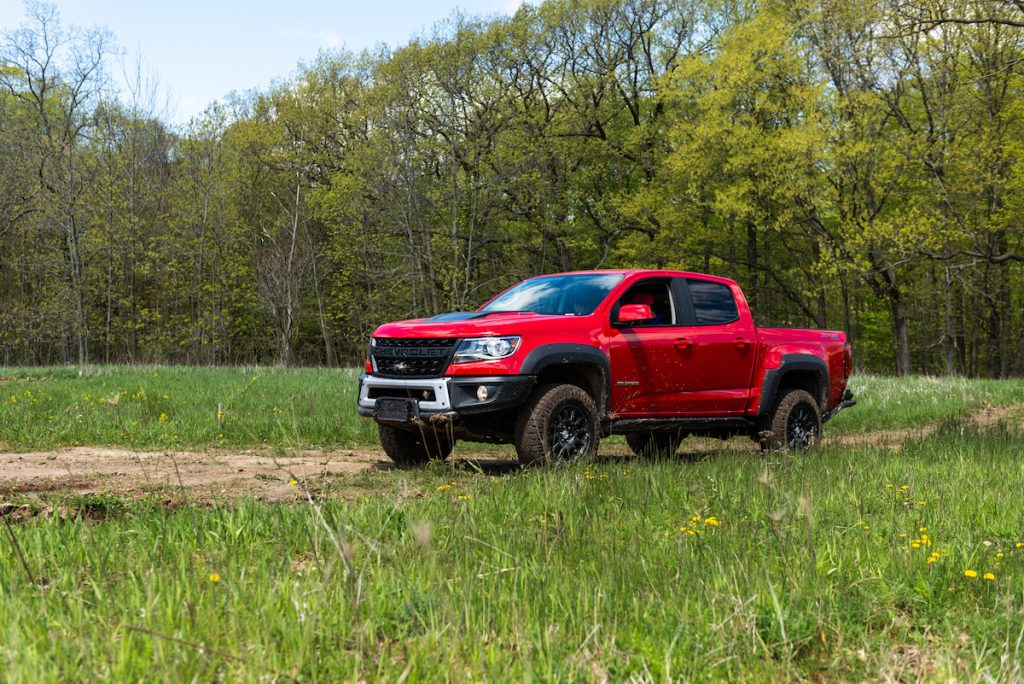 Whereas the Jeep Gladiator sticks to a proven formula set out time and again by its brother, the Wrangler, Chevrolet took a completely outside-the-box approach to make the ZR2 Bison a reality. Collaborating with American Expedition Vehicles, an authority in (ironically) upfitting Jeep and Ram vehicles with top-shelf go-anywhere kit, Chevrolet took the already robust capabilities of the Colorado ZR2 to uncharted levels. The result of which is the first vehicle of its kind: a truck finished by a third party that can be ordered from Chevy directly, and delivered to a local dealership. Some unorthodox qualities that the ZR2 Bison incorporates are trick Multimatic DSSV dampers, and expensive hot-stamped boron steel plating to armor the underside. There’s also a snorkel available as an accessory.

Ultimately, both midsize trucks are incredibly capable, and the one to choose will come down to the priorities of the buyer. To figure this out, we tested the Gladiator and Bison during the 2019 Midwest Automotive Media Association Spring Rally, held at Wisconsin’s Road America. Let’s get started on the breakdown… The 2020 Jeep Gladiator Rubicon starts at $43,545, and mildly undercuts a baseline 2019 Colorado ZR2. But don’t let that number fool you. Tack all the high-end options, and that Jeep Gladiator price quickly swells to over $60,000. That’s loaded Ford F-150 Raptor money. And Ram Power Wagon money.

Let’s call it the Jeep Tax. Because at the end of the day, the 2020 Gladiator Rubicon will be instantly recognized as a truck from America’s quintessential SUV brand. It carries a style that the Chevy just does not possess. For the casual onlooker, the Colorado ZR2 Bison might be mistaken for somebody’s BillyBob bro-dozer, while the Jeep can be seen as more of a fashion item. Yet the Chevy is more inconspicuous, arguably on purpose. This is a theme that repeats itself between the two off-road apex predators.

The Bison carries a $5,750 premium over the standard ZR2, which is tacked on top of either the $43,995 V6 model, or the $47,495 2.8L Duramax diesel model, and is next to impossible for the truck to crest $60,000, even with over $10,000 in options and accessories available according to the Chevrolet configurator. Additionally, the Chevy is the only truck in the segment with a diesel engine for now. The Jeep Gladiator is expected to add a 3.0L V6 EcoDiesel as early as next year.

The biggest disparity between the 2020 Jeep Gladiator Rubicon and the Chevrolet Colorado ZR2 Bison is unquestionably what’s going on in the cabin. To boil down the Jeep’s interior into a single word, it can simply be described as “fun.” There’s color popping out; there’s buttons, knobs, levers, and switches everywhere. Even the way the doors open and close, the way the arm can casually rest on the open window sill, and the commanding view of what’s ahead… it all feels special. And if the occasion doesn’t call for doors, they can be removed, as can the roof. It’s a trademark Jeep party trick that everybody likes.

If the Colorado ZR2 Bison interior could described in one word, it’s “boring.” We don’t write about boring vehicles here at Muscle Cars & Trucks, and the Bison is far from boring, but embroidered headrests and some floor mats just don’t reflect the go-anywhere, do-anything nature of this midsize Chevrolet truck. But again, the design of the truck can be considered tactical, reserved, and inconspicuous.

Echoing the same outside as inside, the Jeep Gladiator Rubicon is visibly more recognizable and iconic. There are, however, a few odd angles of it. The rear end, for example, doesn’t seem to do it for some people. Maybe because the five-foot truck bed comes off as disproportionate to the cabin. Jeep, however, did get clever to make sure that the bed could accommodate a full sheet of plywood. The sheets can be stacked on top of the wheel wells, while a tailgate support cable can be fixed into a halfway position that is capable of resting the plywood on top of it.

More traditional to aesthetic pickup truck form is the Chevrolet Colorado ZR2 Bison. The main giveaway that you spotted a Bison, and not a ZR2 with an accessory grille insert, is the American Expedition Vehicles badge stamped on the tailgate. Without the willing collaboration with AEV, the Colorado ZR2 Bison would likely have never existed. But like we mentioned before, casual onlookers would likely have no idea what the Bison is, or what it is even capable of. It’s the off-road equivalent of a Chevrolet SS performance sedan: a total sleeper.

The Gladiator undoubtedly has more presence, and like its interior, is iconically stylish (from most angles). However, it’s the Chevy that has the superior road manners. We can thank its Multimatic DSSV dampers for that. And if it matters to you, the ZR2 Bison is far more anonymous looking compared to the Jeep, making it the stealthy choice for those emphasizing a more tactical persona.

The softened suspension of the Jeep Gladiator Rubicon is not nearly as behaved as the Chevy. But that’s not at all to say that the Jeep pickup is bad on everyday roads. It’s just that the Bison is magically good for a truck of this extreme nature.

The Bison offers incredible capability out of the box in a package that’s smaller than the 2020 Jeep Gladiator. Mostly thanks to its extended cab configuration, whereas the Jeep comes only in a spacious crew cab configuration. The extra six inches of the Jeep makes navigating tight tree-lined trails a bit tedious. And it’s easy to forget that the Gladiator isn’t a stubby Wrangler, just on the sole basis that the interior and forward views are identical. Reminding ourselves of that fact after a few close calls, we found ourselves constantly monitoring the front and rear opposite corners with each steering adjustment.

Compensating for the extra size are a few aces up the sleeve. The 2020 Jeep Gladiator Rubicon is the only pickup truck on the market right now with a disconnecting rear sway bar, which results in more extreme angles of articulation. This means bigger rocks, and deeper trenches can be traversed more effectively. There’s also the highly convenient forward-facing TrailCam off-road camera, that feeds its image to the center-mounted UConnect infotainment screen, well after an obstacle is out of the driver’s sight line. For those trekking the trails without a spotter, this feature is a game changer. And like the Wrangler, the roof and doors are stylishly removable, where the Chevrolet was never built with these features in mind. Contesting the killer apps of the Jeep are the hot-stamped boron steel skid plates and rocker panel guards of the Bison, suggesting that the Chevy/AEV factory collaboration might be more durable over rocky terrain than the Gladiator. During the media drive of the ZR2 Bison, the trucks were literally dragged across seemingly impassable boulders and granite protrusions with nary a worry. And while the muddier soil at the location of our comparison test didn’t test the mettle of the Chevy’s metal, we have at least bared witness to its durability before. The DSSV dampers of the Colorado ZR2 Bison are also just as superlative off the road as they are on the road.

If you’re about being stealthy and value superior road manners, the Chevrolet Colorado ZR2 Bison is your off-road truck to treasure. However, if you wish to take to the same trails as the Bison with more style and technology, the Jeep Gladiator Rubicon is the choice. Just be ready for a bit of sticker shock if that’s the case.