Having a vehicle that will help you survive off the grid for over a month at a time in some cases may seem like overkill at first glance. In reality, such a move is just the same as opting for the most comprehensive insurance policy available. It may feel like flood insurance in the middle of the desert sometimes. But should something catastrophic happen, such as this pandemic we’re all living through, having the proper COVID-19 coronavirus escape vehicle to bug-out with is just like calling on that insurance policy you hoped to never use.

While we’d like to include vehicles like the 2021 Ford Bronco, Ram Rebel TRX, and perhaps even the Tesla Cybertruck, neither of those vehicles are available on the market today. Although we’d definitely keep them in mind for a future global crisis. Considering the capabilities of these machines, most of them are priced out of reach to the masses. Although, there’s certainly no shortage of used or homemade options on the second-hand market today, for those planning on a budget.

The Colorado ZR2 Bison is Chevrolet’s most capable off-road vehicle, ever. Meaning that you can take you, some of your people, and much of your survival gear farther away from the chaos of civilization than most others. While it’s plenty capable from the factory, AEV offers its own special ZR2 Bison package that upgrades the standard model with 35-inch tires, more protection, a lift, and more. And if things are feeling underpowered to you, there are several tuning companies, such as Lingenfelter, that will fit the gasoline V6 engine with a supercharger that upgrades the output to as much as 500 horsepower.

The Jeep Wrangler is an obvious COVID-19 escape vehicle, as it’s the most customizable 4×4 in the world, which means there are plenty of upgrades from both Mopar and elsewhere to make the popular SUV as capable as anything. Pictured above is the AEV JL370 Package from American Expedition Vehicles, which adds crucial suspension improvements, tire upgrades, more lights, skid plates and more.

If you’re torn between a ZR2 Bison and a JL Wrangler, the Jeep Gladiator might be your thing. It’s actually rated to tow more than the Colorado, and benefits from the deep parts and accessories bin formed around the Wrangler. Happy trails.

Say you want to bug out with more gear and at a higher rate of speed than the midsize trucks. The Ford F-150 Raptor is just the thing. Currently the most off-road capable half-ton truck on the market, the mighty raptor has a massive interior for both gear and people, and has a stout 450 horsepower and 510 lb-ft of torque from its 3.5L EcoBoost V6. Which is actually much of the same engine found in the Ford GT.

The legendary Suburban is just the COVID-19 coronavirus escape vehicle you need to carry eight people and can tow up to 6,300 pounds of everybody’s stuff to the cabin in the woods. The Chevrolet Express van will also do just fine. Say that you prefer Ford products, and you need something that rivals the Suburban in hauling and towing abilities. Look no further than the Ford Expedition. Specifically, the Expedition MAX. Nearly as off-road capable as the Raptor, the 2020 Ram 1500 Rebel can be a lovely vehicle to survive out of when things spiral out of control. Pictured above, the Ram Rebel OTG Concept from the 2019 SEMA Show. The truck comes equipped with several off-grid accessories including a kitchenette and Dometic cooler in the bed, plus a tent, a canopy, and tanks of propane. Moving on up in size is the Ford F-250 and F-350 Super Duty Tremor package. Once thought to be a Super Duty Raptor, the Ford Super Duty Tremor features 35-inch-diameter Goodyear Wrangler Duratrac maximum-traction tires, mounted on 18-inch matte-finished black wheels. Up front is an additional 2-inches of suspension lift with proprietary progressive-rate springs and shorter air dam compared to standard, resulting in 10.8 inches of ground clearance, as well as best- in-class water fording of 33 inches, and the best approach and departure angles of any Super Duty ever – 31.65 degrees and 24.51 degrees, respectively. And while it may not have as much underbody armor as the Ram Power Wagon, it can tow more, thanks to the offering of both a 7.3L Godzilla gasoline V8 and the 6.7L Power Stroke diesel. 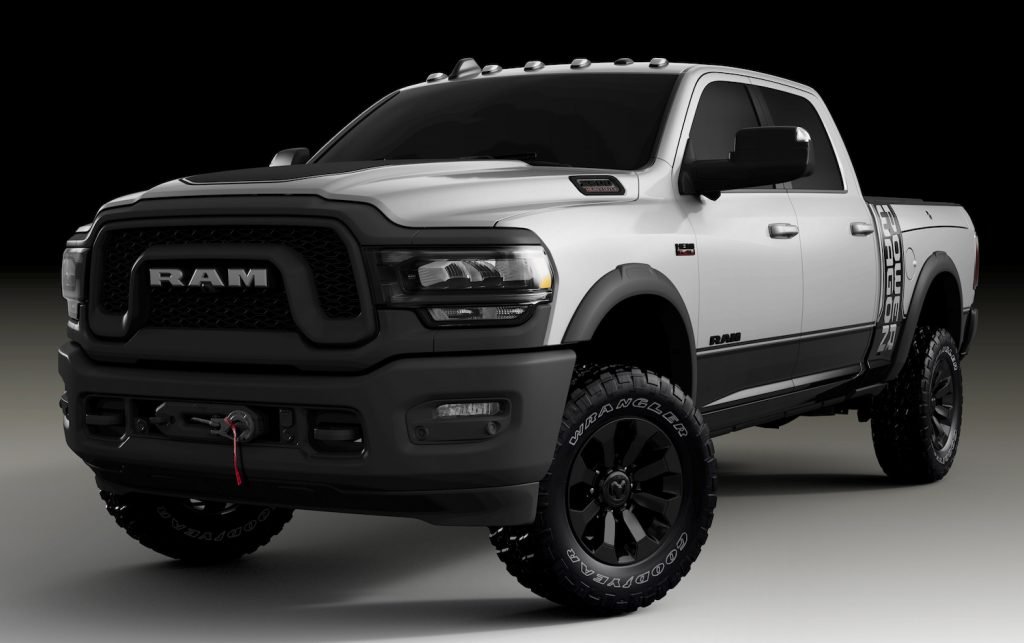 The 6.4L Hemi V8-powered Ram Power Wagon is a no-frills pickup truck that is one of the most capable large off-road trucks from the factory. Hardware includes 33-inch Goodyear DuraTrac AT tires on 17-inch wheels, underbody armor, electronic-locking front and rear Tru-Lok differentials, hill-descent control, tow hooks, specially tuned Bilstein shocks in the front and rear, and an electronically disconnecting front sway bar that allows for 26 inches of wheel travel. A 4.10 rear axle ratio is also standard.

This is the ultimate Class 2b off-road pickup truck. And we’re counting it separate from the Ram Power Wagon because there’s a very significant difference: the Power Wagon is gas only, while American Expedition Vehicles will upfit Ram Heavy Duty trucks equipped with Cummins diesel engines. The AEV Prospector XL package is also more than $17,500 on top of the Ram HD required to make the build happen. The suspension system has been redone to work with absolutely massive 41-inch tires, while the body has been equipped with new bumpers, a snorkel, mud flaps, and more. This kit should allow you get away from the COVID-19 pandemic. Far away.

A Hummer would be the perfect Coronavirus bug-out machine. But the AM General Humvee (Hummer H1) is no longer, but Michigan’s Mil-Spec Automotive continues to carry the torch by refurbishing unwanted H1 utility vehicles into modernized versions of themselves, as if production never stopped. A quick look online shows the Mil-Spec H1 going anywhere from $110,000 to $250,000 depending on the configuration. The powertrain is a 6.6L Duramax diesel engine connected to an Allison 1000 transmission, propelling the massive SUV from 0-60 in just 6.5 seconds (or faster, depending on the body style). The interior can also be sprayed down with a hose, as all off-road SUVs should be able to.

Now we’re getting into some real post-apocalyptic automobiles to escape the COVID-19 pandemic. While the Rezvani Tank is based on the Jeep Wrangler, it’s so, so, so much more. For example, some options include the engine from a Dodge Demon, EMP protection, bulletproof windows, and an electric theft deterrent. Of course, a Rezvani Tank equipped with this level of content will cost you at least $349,000. But hey, it’s more practical bug-out vehicle than a similarly-priced Ferrari during the end times, so in that sense, it seems like a great value.

In 2012, Conquest Vehicles announced their first unarmored vehicle, the Evade. Nevertheless, it rides on the mighty chassis of an F-550 Super Duty, comes with front + rear commercial-grade air ride suspension, roof-mounted 360-degree joystick-controlled searchlights, power windows and the FLIR night vision camera on the front and rear of the vehicle. And if you want one to escape the COVID-19 pandemic, it will be $579,000. And, if you don’t mind, it’s made in Canada.

The Knight XV is the flagship SUV of Conquest Vehicles. It is armored, and weighs in at a goliath 8.8 tons. It’s actually based on the Terradyne Gurkha (more on that below), but with an interior that’s significantly more comfortable. This means that a casual RPG blast from outside won’t necessarily disrupt your serenity of playing Animal Crossing from the inside. Originally priced at $310,000, the Knight XV can be found on the second hand market for nearly twice as much. As if there’s demand for such a machine. Like the Evade, the Knight XV is of Canadian origin.

Say the Knight XV is a little too foo-foo for you. Canada’s Terradyne Armored Vehicles is a military vehicle based on a Ford F-550 4×4 chassis. It comes in four different body styles, but all of them feature a 6.7L Ford Power Stroke diesel with a 40 gallon fuel tank, and the one made for us to buy is the ‘CIV’ or “Civilian Limited Edition Vehicle.” It probably doesn’t come with the optional machine gun turret, but there’s still a roof hatch for you to peak out from. These things can also weigh as much as 13,000 pounds, and have a tire-limited top speed of 130 miles per hour. That’s a frightening amount lot of inertia if you think about it. And if it’s good enough for American law enforcement, it’s good for your COVID-19 coronavirus contingency plan, too.

The Ripsaw is not street legal. But if civilization collapses from the COVID-19 coronavirus, who is going to write you a ticket? Built by Howe & Howe Tech, this Duramax-powered tank is the fastest dual tracked vehicle ever developed, and can seat up to four people. The price of entry is roughly $500,000. If you’re looking for something to retreat from the COVID-19 coronavirus, a zombie apocalypse, or the outright demise of life as we know it, it doesn’t get any bigger or more capable than this. Quite literally a motorhome, the EarthRoamer XV-HD utilizes the fortified bones of a 4×4 Ford F-750 chassis and measures 35-feet long, 8.5 feet wide, and 13.2 feet tall. While it doesn’t have the armoring of the Knight XV or the Rezvani Beast, it can support the lives of several people living out in the middle of absolutely nowhere for a radical amount of time. For instance, its capacities include 115 gallons of diesel fuel, 250 gallons of fresh water, 125 gallons of gray water, 125 gallons of black water, 20kWh worth of lithium ion battery packs, a 2100 Watt roof solar energy system, and multiple cabin configurations based on the needs of customers. And unlike a traditional motor home, the Earthroamer XV-HD can venture well off the trail, with 12 inches of ground clearance, an approach angle of 46 degrees, a 23 degree departure angle, and a 12 degree breakover angle. Want one? They start at $1.7 million. And you should have placed your order in at least eight months ago, as the line is that long.